On November 11th, 2018, the Pforzheim Galerie opened an exhibition with some of the works of artists Vera and Bert Joho.

Vera Joho, daughter of well-known art nouveau jewelry designer and manufacturer Theodor Fahrner, and Bert Joho, a young art teacher from Karlsruhe, were important figures in the cultural and artistic life of Pforzheim, Germany’s capital for goldsmithing and watchmaking. It is the first Joho exhibition in a long time, and it showcases oils, water colors, carbon and chalk drawings by two artists that supported and complemented each other during their entire life together. It is noteworthy that many of these paintings survived two world wars.

A companion book was commissioned for this occasion. It offers some insight into the lives and the artistic work of Vera and Bert Joho as well as a selection of other paintings that were not included in this exhibition.

We are delighted to share these treasures with you – paintings are to be exhibited and admired, not hidden away in drawers or archives.

This exhibition and self-published book are dedicated to our mother, Virginia Joho de Reinshagen, who safeguarded and administrated the Joho legacy for many decades.

Enjoy your encounter with the artwork of Vera and Bert Joho. 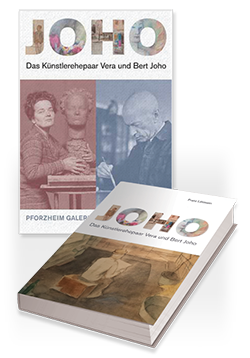 Most of the exhibitions that showed the work of Vera and Bert Joho during the 20th century have been documented in JOHO, Das Künstlerehepaar Vera und Bert Joho.

And there had been many of them, until the rise of the Nazi party in Germany made it impossible for them to show their art. However, after the end of World War II, their art became accessible to the public once again.

They were citizens of the world, having traveled extensively throughout Europe, to Morocco and Tunisia. In the early 1950s they made trips to Mexico, Guatemala, Cuba, and the United States. Their experiences were often reflected in their artwork.

For a long time, Vera was known only for her magnificent portraits and still lives as well as her flower paintings. These could be vibrant and bursting with color or delicate and subtle, her style at times naturalistic, at times impressionistic. However, she left an equally amazing trove of watercolors and drawings that depicted Paris and its residents. She visited the City of Lights many times, including during the World Fair of 1937, and she illustrated a book about one of her stays, Frau Joho in Paris.

Then there are the many watercolors, oils, and drawings she produced during her prolonged stays in Mexico, and her travels to Cuba, Guatemala, and the United States. The lush landscapes of the Mexican state of Chiapas come to life in her watercolors, as does its native population, often times with just a few charcoal strokes.

Vera and Bert, who was an avid skier, were frequent guests at the Feldberger Hof, one of Germany’s first ski resorts, located in the heart of the Black Forest. They became friends with the owners, and Vera painted a ceiling fresco in one of the hotels restaurants. Bert, on the other hand, designed promotional materials for the hotel, among them the theme poster for the 2018 exhibition.

At this resort they met the Schladerer family, the owners of the eponymous distillery of fine spirits and liqueurs located in the city of Staufen. Not many people know that Vera designed the company’s labels, publicity material and greeting cards as well as the relief on the characteristically shaped bottle – which to this day is sold in many parts of the world. The company even commissioned a mural at the Freiburg train station to welcome tourists.

We find themes of a different nature in Bert Joho’s work, street and circus artists are a central and recurring motif – jugglers, clowns, acrobats, performers of all sorts, ‘travelers’. He focuses on certain aspects of a life that often takes place on the fringes of society. Another common theme are his cityscapes. They show us the world in which the human being has to find his or her way, often pointing out sharp contrasts between different segments of society. It is noteworthy that there is often a single character in a painting, at the most there are three, maybe four.

His watercolors and drawings of Pforzheim would gain historic importance for the town’s architecture – after 1945 most of these streets and buildings were gone. He then painted the ruins, mountains of rubble and detritus, yet amidst all the desolation there would always be some element of hope. Life goes on.

And then there are countless portraits of women – full face or body, profile, turning their back to the observer. Many seem to hint at the enigmatic nature of the female gender, at times seductive, at times distant and forbidding.

Graphic design was yet another facet of this versatile artist’s work, such as greeting cards or posters for local companies and friends, but he also drew almost surrealistic and symbolic pictures that look like scenes from a dream. He had a sharp wit and dry sense of humor that showed in some of his illustrations of books and magazines. During his time with the military, he edited and illustrated a newspaper.

Both Vera and Bert drew illustrations for books and periodicals; their paintings were included in calendars featuring famous painters or published as collections, catalogs were printed for many of their exhibitions. Most of them are listed in the JOHO book (e.g. Frau Joho in Paris, Steinacher Leut, Der Querschnitt).